On 24th of April, Fibromyalgia Association of Sweden arranged a lecture with Dr Diana Kadetoff, a prominent fibromyalgia researcher at the medical university Karolinska Institutet in Stockholm. She also works as a pain specialist at Stockholm Spine Center. 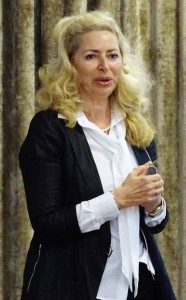 During the first part of her lecture Dr Kadetoff talked about fibromyalgia in general, and common triggers for developing the condition. Some of the triggers she mentioned were stress, sleeping disturbances, psychosocial factors, and infections. According to research there is evidence that fibromyalgia also has a genetic factor, but a specific gene linked to fibromyalgia has not yet been found. Dr Kadetoff thinks that the discovery of such a gene lies within the near future.

The second part of the lecture was focused on research. Some of the research findings that Dr Kadetoff talked about were: elevated levels of Substance P in FM patients (Substans P is a substance connected to pain), and low levels / deficiency of serotonin.

She also talked about her own research, which was noticed internationally when it was published in 2013. As far as they know, she and her research team were the first to find elevated levels of the pro-inflammatory cytokine IL-8 in the spinal fluid of FM patients.

This Site Is Protected By
Shield →
MENU