The European Federation of Neurological Associations EFNA  celebrated the Brain Awareness Week 2019 by creating and publishing a new awareness campaign.

Patient-based evidence of the burden of living with neurological disorders were the basis of the #BrainLifeGoals campaign. Patients having different neurological conditions  were asked what would make a difference to their life as a patient with a brain disorder.

The campaign was published during the Brain Awareness Week, March 11-17 and united under the hashtag #brainlifegoals patients and supporters’ insights, highlighting the differences between their lives and others’.

The campaign is followed by a support initiative for projects raising awareness on brain disorders. 5 grants of 2,500 EUR are offered to the winning projects. The details will 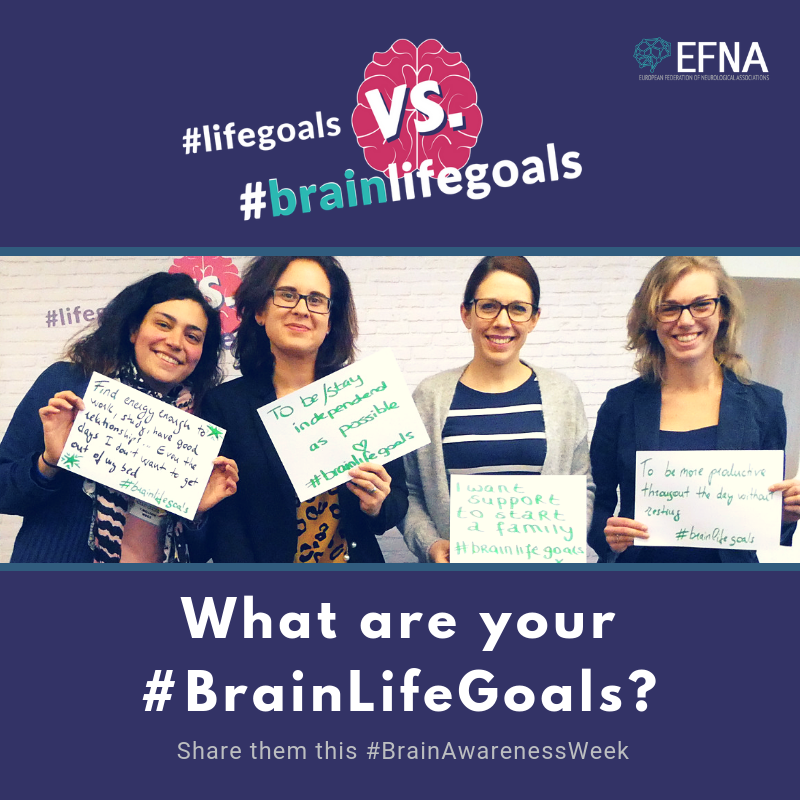 Here is how EFNA described their action:

“Sharing #LifeGoals has become a popular trend in social media. #LifeGoals are the often frivolous wishes people have – for example to own a designer handbag, meet a particular pop star or drive a Maserati! In this campaign we will put a new spin on the #LifeGoals trend by instead sharing #BrainLifeGoals. So while one person’s #LifeGoals might include ‘To run a marathon’, someone living with chronic pain can have a goal such as ‘To walk without pain’.

The #BrainLifeGoals campaign will raise awareness of the impact of neurological diseases by exploring the dreams and aspirations of those living with a brain disorder.”